Buddhism: The Religion of No-religion

The widespread influence of Buddhism is due in part to the skill with which a way of liberation was refined by it’s teachers and became accessible to people of diverse cultures.

In this dynamic series of lectures, Alan Watts takes us on an exploration of Buddhism, from its roots in India to the explosion of interest in Zen and the Tibetan tradition in the West. Watts traces the Indian beginnings of Buddhism, delineates differences between Buddhism and other religions, looks at the radical methods of the Mahayan Buddhist, and reviews the Four Noble Truths and The Eightfold Path

“The taped lectures of Alan Watts have inspired a generation. Now, in handsomely designed little volumes, of which this is the first, they are appearing in print form. Few people in the middle of the century spoke as eloquently as Watts about Zen. Here, five of his justly famous lectures?three of the so-called “Japan Lectures” and two, delivered on his Sausalito house boat, on Tibetan Buddhism?are now transcribed and compiled. Especially welcome is the transcription of the renowned “Religion of No Religion” lecture in which some of the most difficult Buddhist concepts are presented with such lucidity as to make us gasp. Watts, an Episcopal priest who became a Zen scholar, was an accomplished stylist; and although his famous voice and happy laughter are missing now, his penetrating vision of Buddhism remains, and his lectures become brilliant prose in book form. This series, and this volume in particular, will be important to any new student of the East’s religions.” – From Publishers Weekly 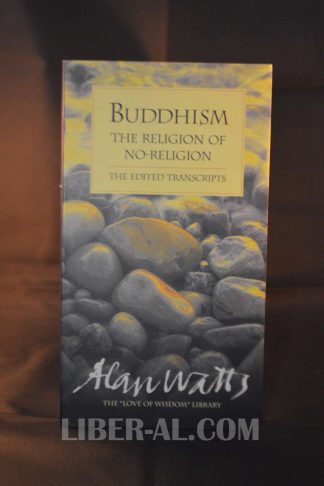 You're viewing: Buddhism: The Religion of No-religion $34.36
Add to cart