Outside the Circles of Time (Hardcover)

Outside the Circles of Time was first published in 1980. It has been newly typeset, with some of the original illustrations now in colour, and augmented with previously unpublished artwork by Steffi Grant. The fifth volume in the series of Grant’s Typhonian Trilogies, this is a work that covers an extremely wide area and exposes – to quote from the jacket of the 1980 edition – “a network more complex than was ever imagined: a network not unlike H.P. Lovecraft’s dark vision of sinister forces lurking at the rim of the universe”. Outside the Circles of Time explores a complex of such ideas, from Blavatsky’s Secret Doctrine, Crowley’s Book of the Law, Lovecraft’s Necronomicon, and Frater Achad’s researches. It also explores the work of Soror Andahadna, a contemporary Priestess of Maat whose work has parallels with that of Frater Achad some decades previously when he announced the inauguration of the Aeon of Maat in 1948. On the more orthodox premise that each Aeon lasts 2,000 years, we are at the beginning of the Aeon of Horus, so the Aeon of Maat might appear a long way off yet. However, the following passage from Outside the Circles of Time puts the matter in a different light:

Myths and legends are of the past, but Maat should not be thought of in terms of past or future aeons. Maat is present now for those who, knowing the ‘sacred alignments’ and the ‘Gateway of Inbetweenness’, experience the Word ever coming, ever emaning, from the Mouth, in the ever new and ever present forms that are continually being generated from the mystical Atu or House of Maat, the Ma-atu . . .

But the book is not simply or even primarily about the Aeon of Maat. It is a potent weaving of a host of apparently diverse strands into a broad, deep and powerful current. Though Grant’s volumes in the Typhonian Trilogies have each a unique flavour, Outside the Circles of Time seemed to herald a jump into a different dimension. To round off this synopsis, the closing paragraphs are taken from the Introduction. They convey at once the direction and flavour of this rich and powerful book:

One final point is here relevant, and I state it without apology. It is not my purpose to try to prove anything; my aim is to construct a magical mirror capable of expressing some of the less elusive images seen as shadows of a future aeon. This I do by means of suggestion, evocation, and by those oblique and ‘inbetweenness concepts’ that Austin Spare defined as ‘Neither-Neither’. When this is understood, the reader’s mind becomes receptive to the influx of certain concepts that can, if received undistortedly, fertilize the unknown dimensions of his consciousness. In order to achieve this aim a new manner of communication has to be evolved; language itself has to be reborn, revivified, and given a new direction and a new momentum. The truly creative image is born of creative imagining, and this is – ultimately – an irrational process that transcends the grasp of human logic.

It is well known that scientists and mathematicians have evolved a cryptic language, a language so elusive, so fugitive, and yet so essentially cosmic that it forms an almost qabalistic mode of communication, often misinterpreted by its own initiates! Our position is not quite as desperate, for we are dealing primarily with the body-mind complex in its relation to the universe, and the body-aspect is deeply rooted in the soil of sentiency. Our minds may not understand, but in the deeper layers of subconsciousness where humanity shares a common bed, there is instant recognition. Similarly, a magician devises his ceremony in harmony with the forces he wills to invoke, so an author must pay considerable attention to the creation of an atmosphere that is suitable for his operations. Words are his magical instruments, and their vibrations must produce not a merely arbitrary noise, but an elaborate symphony of tonal reverberations that trigger a series of increasingly profound echoes in the consciousness of his readers. One cannot over-emphasize or over-estimate the importance of this subtle form of alchemy, for it is in the nuances, and not necessarily in the rational meanings of the words and numbers employed, that the magick resides. Furthermore, it is very often in the suggestion of certain words not used, yet indicated or employed by other words having no direct relation to them, that produce the most precise definitions. The edifice of a reality-construct may sometimes be reared only by an architecture of absence, whereby the real building is at one and the same time revealed and concealed by an alien structure haunted by probabilities. These are legion, and it is the creative faculty of the reader – awake and active – that can people the house with souls. So then, this book may mean many things to many readers, and different things to all; but to none can it mean nothing at all, for the house is constructed in such a manner that no echo can be lost. 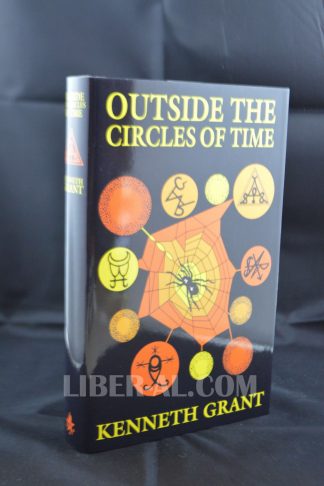 You're viewing: Outside the Circles of Time (Hardcover) $41.00
Add to cart