The Book of Lies is a witty, instructive, and admirable collection of paradoxes; however, it is not a philosophical or mystical treatise. Actually, its subtleties exhilarate. Scholars have said it is “stupendously idiotic and amazingly clever.” To endeavor to translate into definite terms Crowley’s aphorisms would detract from the value of the book. It is wiser for readers to make their own interpretation.

The ninety-three chapters, which may be a single word, a half dozen phrases, twenty paragraphs, or even two pages, have subjects determined more or less definitely by Qabalistic significance — for example, Chapter 25 gives a revised ritual of the Pentagram.

The Commentaries following each chapter are equally outrageously impressive. Subtly embodied in the book is the entire symbolism of Freemasonry as well as the symbolism of other traditions. Aleistar Crowley was not only a deep well of fundamental knowledge but also an even deeper well of symbolic knowledge.

The Book of Lies was first published in 1913 — far ahead of its time. The 1952 revision was significant because an additional commentary appeared at the end of each chapter. This latest reprinting is by popular demand. 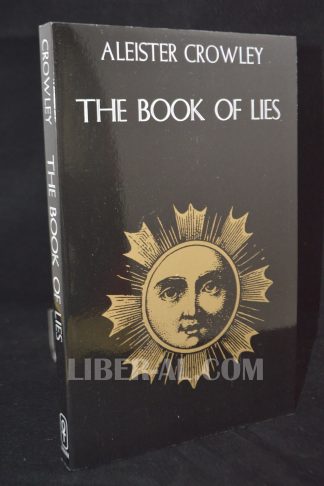