The Fraternitas Saturni: History, Doctrine, and Rituals of the Magical Order of the Brotherhood of Saturn

The most influential magical group in Germany during the 20th century, the Fraternitas Saturni or Brotherhood of Saturn, is still the most active and important magical society in Germany today. But from its formal beginnings in 1926 in Weimar Berlin until around 1970 it was almost totally secret. Most of what is known about the Order in the English-speaking world is fragmentary and focuses exclusively on the sensational sex-magic practices and Luciferian tendencies of this magical lodge.

Presenting the most in-depth work in English on the Fraternitas Saturni, Stephen Flowers examines the history of the Order from the mid-1920s to the late 1960s when the Order was fundamentally reformed. He details their path of initiation, secret doctrines, ritual practices and magical formulae and offers biographies of the Order’s most prominent members, including founder Gregor A. Gregorius, Karl Spiesberger (Frater Eratus), Albin Grau (Master Pacitius) and Franz Saettler (Dr. Musallam). Exploring the Brotherhood’s guiding principles, he shows that at the heart of Saturnian ideology is the idea of Saturn-Gnosis: the interplay of opposing forces in the universe leading to the realisation of the individual self as a god-like entity. He examines the Order’s teachings on cosmology, the Kabbalah, the Saturnian Sacraments, electrical magic, sexo-cosmology, sex-magic rites and sexual mysticism – the Yoga of the Dark Light – and transcribes many of their actual rituals and practices, including the highly controversial Gradus Pentalphae, in such detail that readers will be able to undertake their own experiential work.

Explaining the meanings of all 33 grades of the Order, the author, also, looks at the infamous Freemasonic Order of the Golden Centurium, the cult of Adonism, the links between Thelema and the Fraternitas Saturni and the rare teachings of Master Pacitius (Albin Grau), the visual genius behind the film Nosferatu. He, also, includes rare reports by Aleister Crowley concerning his interaction with some of the forerunners to the Order and letters from the Order’s founder, Gregor A. Gregorius, to the “Great Beast.”

· Explores the history of the Order from its founding the late 1960s
· Transcribes many rituals and practices in such detail that readers will be able to undertake their own experiential work
· Examines the Order’s teachings on cosmology, the Kabbalah, the Saturnian Sacraments, electrical magic and sexual mysticism – the Yoga of the Dark Light
· Includes biographies of prominent members, including founder Gregor A. Gregorius, Karl Spiesberger (Frater Eratus) and Albin Grau (Master Pacitius)

“The Western esoteric tradition, from which this book’s subject emerges, has now gained acceptance as a branch of the Western canon worthy of scholarly inquiry and as a discipline deserving of its seat in the academy. Flowers casts light on one of the 20th century’s most secretive, intriguing (and misunderstood) occult orders, the Fraternitas Saturni. This is a fascinating and highly readable study of the Order’s tantric, astrosophical, and Nietzchean doctrines; their Gnostic sexual cosmologies and practices; their quasi-masonic structure; the Order’s enigmatic and innovative figures such as FS Grand Master Gregor A. Gregorius; and the influence of Aleister Crowley, Thelema, and the Ordo Templi Orientis (O.T.O.) on the Brotherhood.” (Stephen J. King (Shiva X°), Grand Master, Ordo Templi Orientis)

“Germany’s contribution to the Western magical tradition reaches back, in modern form, to the medieval Grail myths, the founding of the original Rosicrucian Order and its many later derivatives, the quasi-masonic operations of the Bavarian Illuminati, Germany’s legendary influence on the Hermetic Order of the Golden Dawn, and, of course, its role in the founding and early development of the Ordo Templi Orientis. The Fraternitas Saturni Order is heir to all of these, and Stephen Flowers, Ph.D., has devoted decades to expanding and deepening the research that led to his first groundbreaking book on the Order. This fourth revised and enlarged edition may at last represent the completion of that herculean task as it more deeply explores and communicates the Order’s mysteries to a yet wider audience. Critically, Flowers elucidates at length on the primary characteristic that makes the Fraternitas Saturni so unique–its dual emphasis on social lodge work and group ritual, balanced by its curriculum of disciplined individual practices that must be accomplished in silence by each member.” (James Wasserman, author of The Mystery Traditions)

“Stephen Flowers lets the cat out of the bag on the subject of the Fraternitas Saturni and takes us into the richly Faustian world of Germanic occultism from which the order emerged, created out of a heady brew of Freemasonry, astrology, Golden Dawn magic, Crowley’s Thelema, and much more. With its detailed descriptions of the order’s rituals and practices, this book is an eye-opener with a vengeance.” (Christopher McIntosh, Ph.D., author of Eliphas Lévi and the French Occult Revival)

Stephen E. Flowers, Ph.D., received his doctorate in Germanic languages and medieval studies from the University of Texas at Austin and studied the history of occultism at the University of Göttingen, Germany. The author of more than 24 books, including Lords of the Left-Hand Path and Original Magic, he lives near Smithville, Texas. 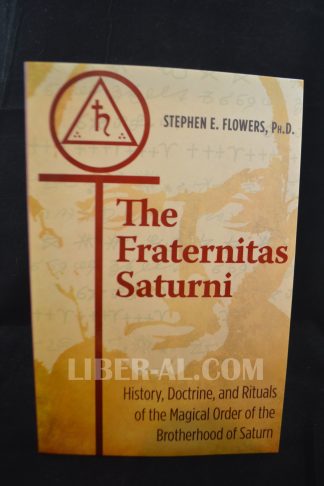 You're viewing: The Fraternitas Saturni: History, Doctrine, and Rituals of the Magical Order of the Brotherhood of Saturn $16.27
Add to cart
We use cookies to ensure that we give you the best experience on our website. If you continue to use this site we will assume that you are happy with it.Ok